Kadha is an Incredible Indian drink that is super ancient and has amazing health benefits. Could you believe that this immunity booster Kadha can be made in just 5 minutes?

Tulsi Kadha is a traditional Indian drink and is my dad's secret recipe that saved us from cough and cold throughout our childhood. This decoction drink is consumed like a tea and is made using the pious Tulsi leaves along with ginger powder, black pepper, cinnamon, and Munakka (raisins).

This several times tested recipe of Tulsi Kadha has also been suggested by Ministry of AYUSH for boosting Immunity.

This ayurvedic Kadha is an immunity booster drink that has been made by our ancestors for ages. It's nothing new but maybe it's just with time, people were lost in the modern ways of living and lost touch with it.

The Kadha comprises of several ingredients that are hot in nature and we really don't wish to have such hot food while running a temperature. There is no scientific evidence that suggests that having kadha can help avoid Covid. That said, it's surely good for cough and throat. Avoid having daily especially in summers.

Tulsi leaves are natural healers and have immunity and metabolism-boosting properties. Adding them to your daily tea or kadha is an easy way to derive their benefits.

Combined with black pepper, ginger, cinnamon and, munakka, this kadha promises to cleanse and support the respiratory system.

What is Haldi Kadha?

Haldi or Turmeric Kadha is similar to Tulsi Kadha. One can add fresh turmeric to this recipe. Remember to use fresh turmeric (Kachhhi Haldi) and not turmeric powder as it can be adulterated. You may get fresh turmeric from your local vegetable vendor.

The other way to make Haldi Kadha is with milk and black pepper.

Who should avoid Kadha?

One important point to note here is that this is a heated Kadha (hot in taseer) and India observes more summer than winters, one may choose to have this healthy drink in controlled portions.

Try having it in the morning time. around ¼ th cup is sufficient. I would also like to suggest that patients with BP and pregnant women shall avoid having Kadha and may consult their doctors about it.

What should I have if I can't have kadha in summers?

That's a perfect question. The answer is warm water.

Have tulsi leaves empty stomach. Whenever you feel a sore throat, have warm water and salted water gargles. That's sufficient.

Now that Covid has happened we all wish to move to the basics of our forefathers.

I remember my father asking mom to make Ajwain Kadha for us in winters to ward off cold and cough. Those days winters were really harsh and I never caught a cold as a kid.

We all are sleeving up for fighting the pandemic that has affected the world totally. I won't say that having this Kadha will make you immune as it can't happen in a day.

One needs to have a whole healthy regime to have an immune body but yes it would be advisable to have Tulsi Kadha or Turmeric Milk along with Breathing exercises and Yoga and gradually expect to have acquired immunity. 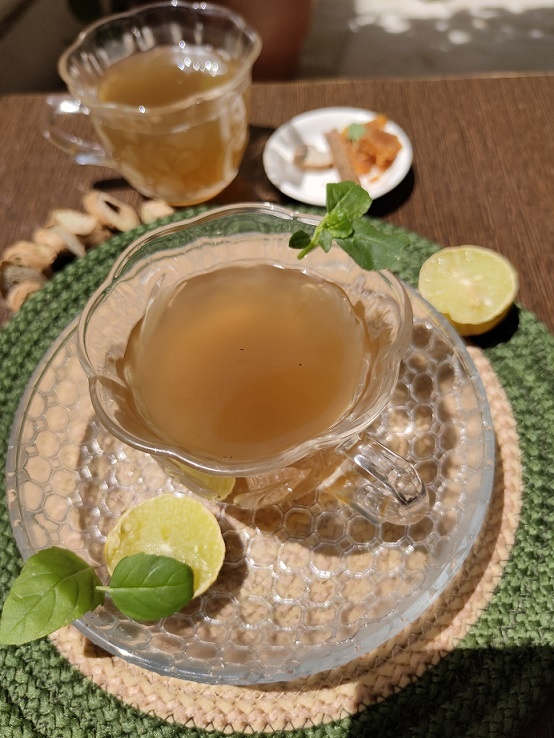 Tulsi Kadha for Corona as suggested by AYUSH

Tulsi Kadha, suggested by Ministry of AYUSH for boosting Immunity is an Ayurvedic Kadha, an immunity booster drink that has been made by our ancestors since ages.
5 from 1 vote
Print Recipe Pin Recipe
Prep Time 5 mins
Cook Time 10 mins
Total Time 15 mins
Course Side Dish
Cuisine Indian
Servings 2 cups

Warm Welcome to my blog!
This blog is created by a former Assistant Professor, mother, and Netflix Binge watcher who is passionate about food! This blog is my collection of homemade healthy vegetarian (egg-free too) recipes that are tested and approved by my family before they are finally posted here. A variety of Indian and World recipes that are made in a simple way!
I am so glad to have you as a part of my journey in this online world.
Thanks for stopping by!

Warm Welcome to my blog!
This blog is created by a former Assistant Professor, mother, and Netflix Binge watcher who is passionate about food! Here, I am sharing homemade healthy vegetarian (egg-free too) recipes that are tested and approved by my family before they are finally posted.

Thanks for stopping by!